Is the customer ALWAYS Right? What Can Be Learned From The United Passenger Debacle

If you’ve been following the recent news, you’ve likely heard of the man forcibly removed from a United Airlines flight for failing to cooperate. It’s a disheartening event, but if you weren’t on the flight does it really affect you? The reality is this altercation represents an important question for every business owner, how much you will let a customer impose on your business before taking action? And to what extent can an imposing customer effect you personally?

Why Did Passengers Have to Leave?

If you aren’t familiar with the story, an overbooked United flight resulted in several people having to leave the plane, but one man refused. The result, the police got involved and dragged the man out in a spectacle doing nothing positive for PR. It’s possible to see this refusing flyer as being in the wrong, but it doesn’t change the fact that he’s a customer.

The last-minute need to add additional crew members to the flight required booting 4 passengers from the flight. But as nobody voluntarily wanted to leave, United ran an analysis of who would be least affected by being bumped off the flight (considering connecting flights and delays). Three of the selected people left without incident, but one refused. It was police that finally removed the man from the plane, but because this was a United Flight, it’s largely their image on the line.

At this point I ask myself what I would do – would I pull another passenger’s straw, forcing them to leave because one passenger is refusing to play along for the greater good of the group? To remove another passenger and let this man have his way would have prevented the altercation, but this seems unfair to everyone else.

So what’s the best course of action? 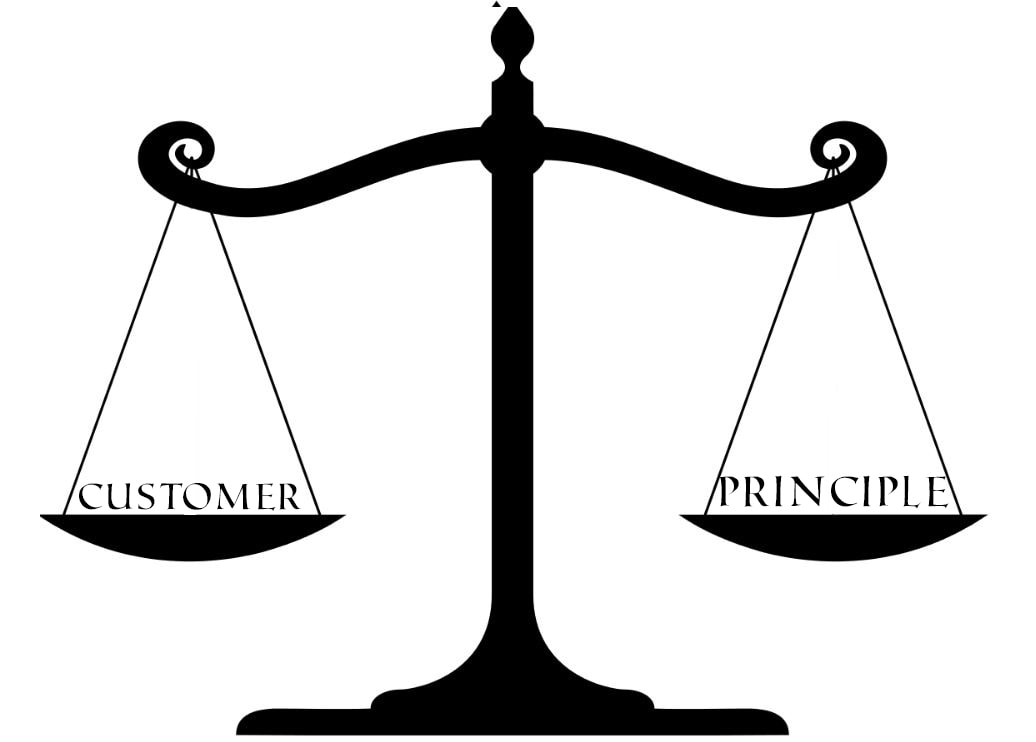 By taking a stand on the issue and removing the customer, United is standing up for all good customers who play by the rules. After all, how many of us like to be negatively affected just because someone else is being stubborn. But on the other hand, many customers reported being disturbed as the man was removed from the plane. So is it better to inconvenience cooperative customers over having them be present to witness such an event?

The rule of thumb is the customer is always right (even when they are wrong), but how far should you take this? A business is only as good as its processes. It’s these processes that allow us to live our lives rather than having to handle everything ourselves; customer service is no exception. But failing to give the customer their way can impact your lifestyle, fighting with them requires your attention, whereas just letting them have their way allows you to stay out in the sun a bit longer.

It’s the sad reality that the belligerent customer may be able to his way the virtuous customer is the one who cuts his losses – although the latter is the one you prefer to reward.

With the United situation, what do you think is the right course of action? Removing the passenger and sticking to your policy, or bending the rules? If you give them their way are you worried that similar actions might continue, eventually breaking your established processes and forcing you to get involved?  Do you have a team who has your back so you don’t have to worry about yourself?

Here at Lifestyle Workweek we know the importance of lifestyle and focus on curating processes so that things can run as smoothly as possible on their own. We even have an ebook on automation to help your business run successfully on its own, which you can download right here. We aren’t guaranteeing it will prevent you from ever having a customer issue, but it will definitely make your life easier and free up your time.

Let us know your thoughts on the United issue in the comments below.